What are the components of a wood roof frame?

A frame is an assembly of wood, metal or concrete components that forms the framework of a roof. It is used to support the roof of a building while giving it the desired shape and accommodating the roof covering.

Although the role of timber frames has remained much the same over time, they have evolved considerably since they were first used in construction. Some components have disappeared while others have been introduced, all with the goal of saving resources and increasing durability.

Modern manufacturing techniques now make it possible to produce a variety of structural components and even assemble them before they arrive on site, which provides many advantages.

In this article, our prefabricated wood structure experts present a list of the components that make up a wood frame to help you better understand how they are designed.

The rafter is one of the components of a roof truss. It consists of a long piece of wood that is inclined and oriented in the direction of the roof slope. It often acts as both a rafter and a crossbeam, which means that it serves both as a support and as a point of attachment for the roof covering.

Although there are various techniques for joining structural components without connectors, most contractors will use some type of connector and fastener to join the various pieces of wood that make up the structure. Of these, metal plate connectors are frequently used in the fabrication of prefabricated roof trusses.

The raking shore is a piece of wood placed at an angle between the king post and the rafter. Its function in a roof truss is to transfer part of the weight supported by the rafter to the king post.

The brace is an assembly of wood pieces designed to provide more stability to the structure, mainly by preventing the trusses from spreading apart under the influence of horizontal forces. The ridge beam, under ridge and purlin are all part of the brace.

The tie beam is a piece of wood placed horizontally that maintains the distance between the rafters by preventing their lower part from spreading. It is attached to the lower end of the trusses to provide tension.

The ridge beam connects the trusses to each other under the roof ridge and is the true centerpiece of the roof structure. It is made of a piece of wood placed horizontally on which the rafters are supported.

The straining beam is very similar to the tie beam described above but shorter in length. It is also placed horizontally between the rafters, but in the upper part of the trusses. A frame can have several straining beams to control downward thrust by resisting compression.

The roof truss is an assembly of wood components (rafters, tie beam, knee brace, post) that forms a triangle. Roof trusses come in different types and sizes to create different roof shapes. Together, the trusses form what is known as the structural frame of a roof.

The knee brace is a component of some types of roof trusses. It consists of an inclined piece of wood that provides additional support to the truss.

The king post is a vertical piece of wood that connects the tie beam or straining beam to the top of the roof truss. Note that some types of trusses have only raking shores and no king post.

The wall plate is a piece of wood that is placed horizontally at the top of a wall, perpendicular to the trusses. It is used to support the thrust of the trusses.

As its name may suggest, the under ridge is located below the ridge. It is made of a horizontal piece of wood.

In conclusion, we hope that this list of timber frame components has helped you better understand how a wood frame supports the roof of a building. Please note that this list is not intended to be an exhaustive list of all the elements that can make up a modern roof structure.

If you have a construction project in mind, UsiHome can provide you with not only structural components such as prefabricated roof trusses, but also floor joists and prefabricated walls. In short, everything you need to build a wood frame building.

Dear customers, please note that due to special circumstances, our production time is longer than usual, about 6 months. Also please note that the delay to receive a quote is currently about 20 days. Thank you for your understanding. 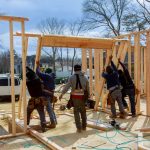 Which types of connectors and fasteners to use when building a timber frameFloor joists, Prefabricated walls, Roof trusses 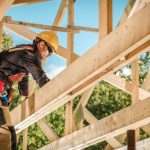