However, in order to build a solid structure that will withstand the test of time and the many stresses it may face, it is important to choose the right type of beams and join them using the appropriate method.

In this article, our prefabricated wood structure specialists will present several types of wood beams and the techniques that can be used to join them.

Beams are large pieces of wood that are able to bear heavy loads. They can be made of solid wood or engineered wood.

There are many varieties available, each with its own characteristics:

Solid wood beams are made of a single piece of wood. As their name implies, they are very sturdy. They have been used for centuries to make buildings and structures of all kinds.

The rugged appearance of these beams gives them an undeniable charm, but they can be quite expensive. Their considerable weight can also make them more complicated to install.

The finger-jointing technique is one way to optimize the use of forest resources. It is a manufacturing process that creates beams of considerable length by combining several short pieces of solid wood stripped of their structural flaws.

In order to achieve better durability and higher mechanical strength, the wood pieces are assembled lengthwise and connected by finger joints.

Laminated veneer lumber or LVL beams are considered engineered wood. They are made up of a number of wood veneers around 3 mm thick, glued parallel to each other under heat and high pressure.

These structural composite lumber beams are much less likely to warp, twist, bow or shrink than solid wood beams. Some of the veneers can even be placed with the wood grain perpendicular to the rest to increase strength and durability.

Glued laminated timber (sometimes abbreviated as glulam) beams are made up of wood slats 6 mm to 45 mm thick, glued together using a water-repellent adhesive, with all fibres going in the same direction. They are valued for their mechanical strength, dimensional stability and aesthetic qualities.

These engineered wood beams can reach an impressive length and are therefore useful in the construction of large buildings with wood frames.

These beams have better mechanical properties and are more durable than traditional solid wood beams. They are used for exposed timber frames and for constructing timber frame houses.

Prefabricated I-beams are structural and load-bearing products that can be custom manufactured. The “I” configuration consists of an upper and lower horizontal component (the flange) and a vertical section (the web) between the flanges.

The flanges are generally made of laminated veneer or laminated timber, while the web is usually made from oriented strand board (OSB).

These prefabricated I-beams are advantageous because, due to their light weight, they can be easily handled on construction sites without the need for expensive handling equipment, even when they are very long. The “I” configuration creates high flexural strength and rigidity.

Open-web floor joists are made up of two dimensional lumber flanges connected by wooden diagonals. This geometry uses the least possible amount of wood while providing precise, advantageous mechanical properties, particularly in terms of flexibility. Furthermore, the structure leaves room for building components such as plumbing pipes and ventilation ducts.

They are made from sawn timber (2×3 or 2×4) placed flat, which provides the structural sheathing support with a large nailing surface when used as floor joists.

Joints play an essential role in the structural performance of timber frames. Wood beam joint methods should be chosen based on the type and weight of the load they will be bearing.

Here are the main joint methods for wood beams.

This wood beam joint technique is very simple. It involves joining the pieces end to end with the least modification possible.

There are several different types of end-to-end joints:

The main varieties of scarf joints are nibbed scarf joints, which have ends cut vertically or on an angle to prevent them from sliding.

Other nibbed varieties, called “hooked,” can also keep the beams from sliding. They are designed with a notch in the middle that interlocks perfectly with their counterpart, which has the same notch facing the opposite direction.

These types of joints are generally used for large structural members such as rafters, because they are effective at transmitting compression force.

Half lap splice joints consist of interlocking two pieces with a horizontal notch cut halfway through the wood. This method is particularly effective for very large pieces of wood like beams.

It is recommended that metal fasteners be added in order to maximize stability.

This joint technique consists of creating pieces of wood where the end or another part of one covers part of the other. There are several different varieties:

Overlapping scarf joints have an oblique cut with a slightly larger surface area than the conventional scarf joint.

Half lap joints involve removing some material from a part of both pieces of wood in order to interlock them.

This type of joint has many possible configurations:

For this type of joint, only one beam has a notch to fit the end of the other beam.

This is a type of joint where both the receiving piece and the covering piece have a miter.

This method consists of creating a piece of wood with a smaller end bit (the tenon) shaped so that it can be inserted into a slot (the mortise) made on the other piece of wood.

It also has several variations:

Mechanical connectors are usually made of steel and are specifically designed to join wooden structural components.

Mechanical connectors can be divided into two categories based on how they bear loads. They can also be combined to achieve the desired durability.

These mechanical connectors distribute the load through the depth of the beam.

Here are a few examples:

These connectors distribute the load across the contact surface.

There are various types:

Trust UsiHome to help you choose the right beams and joints

Although UsiHome’s specialty is manufacturing structural wood products, we also have extensive engineering expertise. We can help you choose the best type of beam and joint for your construction project.

Feel free to contact us for advice on wood-frame buildings!

Dear customers, please note that due to special circumstances, our production time is longer than usual, about 6 months. Also please note that the delay to receive a quote is currently about 20 days. Thank you for your understanding. 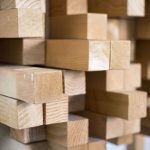 What are the acoustic properties of wood?Floor joists, Prefabricated walls, Roof trusses 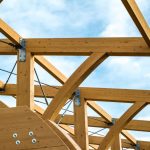 What are the characteristics, uses and advantages of glulam?Floor joists, Roof trusses